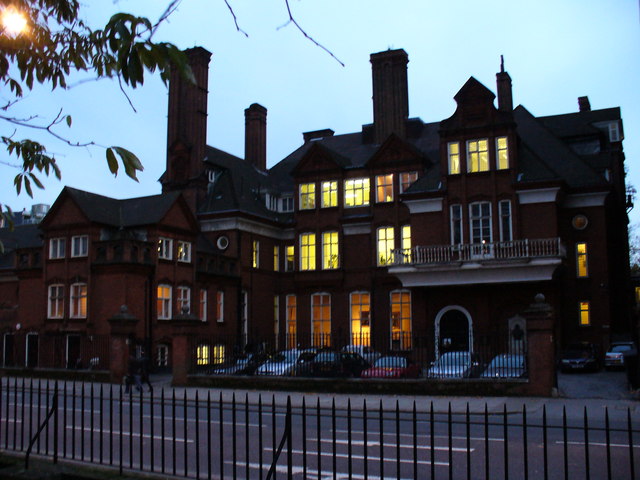 Does the Royal Geographical Society have a ghost? Of course it does!

Cicley is an atheist: she doesn’t believe in things like God and thinks that when you’re gone your dust and that’s it. She has however had experiences with ghosts, or at least with apparitions of the past.

She lived at Charnbrook in Bedfordshire with her American husband, now passed away. At that time she worked at Unilever and was appalled at the way they treated their animals so she reported them to the Animal Liberation Front. On the tide of local rage that provoked she had to leave and her and her husband fled to London.

She got a  job as a telephonist at the Royal Geographic Society on Kensington Gore. The job came with a flat in a building opposite the Society’s Headquarters. She was overjoyed to be in London, starting a new life in the midst of such history.

Her flat was on the first floor. She and her husband had a lot of furniture so they ended up putting up their bed for the first few days in the flat’s large living room.  The first night they went to bed she fell asleep quickly, tired after the exertions of moving. In the middle of the night, she doesn’t know why, she suddenly woke up to see the figure of a monk standing over her. She describes him very clearly: “He was a tall thin man, quite nasty looking and he was wearing a dirty white canvas gown. He had a cap on one shoulder that hung down over one shoulder and had a tassel on the end. He had piercing blue eyes and was pointing a bony finger straight at me; I could even see the dirt under the nail.”

She screamed, waking her husband up, and the monk disappeared. The next night, they moved the bed round to see if that would make a difference. She says the second night she wasn’t quite sleeping, just in the half sleep half wake state that precedes it. Then she opened her eyes and looked out into the room. All the modern furniture was gone and instead the place was strewn with straw. On the floor sat a small dwarfish man in a coloured satin costume like a jockey. He had a  snub nose and ruddy complexion and was pushing a date into Cicely’s mouth.  She jerked back and suddenly the modern room came rushing into being. She says that the corner table reappeared so fast that it’s corner hit her in the eye.  Once again her husband was awakened and a little disgruntled.

Two things she learnt later were that the horses had once been kept on the first floor so that they wouldn’t be stolen and that dates were often given to horses as a treat. A little later the librarian, Francis, took her into a room where he showed her a picture of a carriage with a man in a jockey’s costume at the reigns. It was the same man she had seen.

The third night she was a little anxious. She had a cup of cocoa and went to bed. She woke up again to see a large man standing next to the bed. She says he had thick white legs with red hairs all over them. He was wearing canvas boots with laces, dirty blue shorts and a shirt that looked like a safari suit. He had an Australian style slouch hat on his head, also a faded blue, and he had an enormous red beard. He kept looking at the wall as if it wasn’t there. She just stared at him for a while and then with a sob turned to her sleeping husband and cuddled in.

Other experiences at the Royal Geographic Society came later. On one occasion it was her daughter’s birthday party and the family were round at the flat. They’d run out of wine and she walked over to the door to get some more. She opened the door and saw a tall man in black cloak, She immediately shut the door. Her daughter was standing behind her and said, “Why did you shut the door in that man’s face?”

When the daughter opened the door there was no one there and the door below to the outside was locked.

One day she was sitting at work but things were a bit slack. Strangely, she felt her hand begin to write of its own accord. She watched her own hand spell out in beautiful copperplate handwriting the name: Edmund S Knight 1882. Though she and Mr Holland looked through the list of fellows, she never found an Edmund Knight.

Another time it was a beautiful sunny Saturday and she was alone in the flat doing the post. Her husband was ill in bed upstairs. Suddenly she heard a noise that sounded to her like rushing water. She looked outside; it was still sunny. The noise got louder and louder and suddenly she realised what it was: it was the sound of a sledge rushing over the snow. In a panic she rushed out of the door, scattering the post everywhere.  Of course the Royal Geographical Society keeps Captain Robert Scott’s sledge.

She spoke to Leon who said when he’d been a young man, the housekeeper at the RGS had seen things as well, but he didn’t know exactly what. Does th